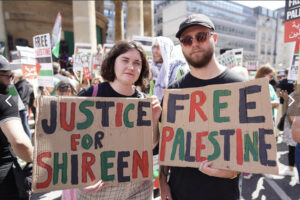 The shocking killing of Al Jazeera reporter Shireen Abu Akleh highlighted the terrible risks faced by those reporting from the frontline in dangerous regions, where holding power to account can make journalists a direct target.

At least 45 journalists have been killed by Israeli forces since 2000, and last year the offices of Al Jazeera and other media organisations in Gaza were destroyed in an Israeli air attack.

“Our press shield (emblem) doesn’t protect us. It should do, but sadly it’s as if the Israeli Army use it as a marker, a target.” So says Palestinian journalist Isra’a El Buhaisi, one of several reporters interviewed in the new film Shooting The Messenger.

London Magazine Branch will be screening the 13-minute short film at the next monthly branch meeting, at 6.30pm on Monday 27 June, to learn about the challenges faced by journalists in the region – and how international solidarity from unions like the NUJ can help bring justice and prevent governments persecuting journalists for doing their jobs.

The film will be introduced by Phil Turner, a member of the South Yorkshire branch of the NUJ which helped raise funding for the film, made with the cooperation of the Palestinian Journalists’ Syndicate.

Followed by Q&A and discussion.

Look forward to seeing you there.

Contacts for any queries

Branch motions
The branch has received the following motion for debate this month:

1.The RMT union has called three days of strikes on 21, 23, 25 June across much of the rail network following an 89 percent vote to strike with a 71 turnout at Network Rail and 13 train operating companies.

This branch believes that: