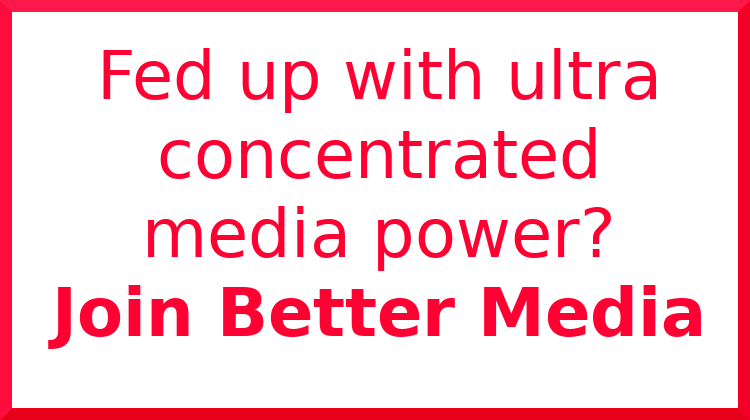 If we want peace, justice and sustainability we need land, money and media reform.

Land and banking reform are the big ones, but we need media reform first; without it we’ll never have the quality of public discourse needed to bring about wider systems change.

As activist and author David Korten once put it:

The key to changing the course of the human future, is to change the stories by which we live.

But the UK media reform movement consists of handful of mostly very small and massively under-resourced groups and organisations who just about manage to punch slightly above their rather slight weight.

To have a fighting chance of ever fulfilling our aims, we need to think bigger. That’s where Better Media comes in.

Our goal is to build a large scale democratic movement to organise, fund and support campaigns for Better Media in the UK. A “Greenpeace for the media“, if you like.

Right now, despite growing numbers of people recognising the dire need for media reform in the UK, there is no default membership organisation for these people to join and support with a monthly direct debit.

The Media Reform Coalition (MRC) and Hacked Off both formed in response to the phone hacking scandal in 2011, and more recently Stop Funding Hate has risen to prominence. But unlike the CPBF, none of these have union-organised media workers at their core, and none are democratic membership organisations.

As the only democratic membership organisation in the space CPBF is the closest thing to what needs to exist: but it’s 20th century name and organisational structure are no longer fit for purpose, and it’s closing down.

The Better Media idea is simple: get everyone who recognises the need for Better Media to routinely contribute funds to help make it so.

How will it work?

Everyone can see where all our money comes from, and how it is spent.

Everyone who signs-up as a contributor is invited to join our online organising and decision-making spaces.

At present we use the Sandstorm.io (an open source platform for easily and securely self-hosting web-based productivity apps) to run WeKan (a Trello clone), Rocket.Chat (Slack clone), and Etherpad (collaborative document editing), together with a WordPress website, a Discourse forum for discussions, and Loomio for decision-making.

Exactly what Better Media becomes will depend on what we do together, but to begin with we’ll be rallying around the proposals in the MRC and CPBF’s Manifesto for Media Reform:

If this sounds good, sign-up as a regular contributor now: https://opencollective.com/bettermediauk

Together we can build the movement for #BetterMedia the UK so desperately needs.

An edited version of this article was first published in CPBF’s journal Free Press No 216.